Reconstruction of the Soka Gakkai 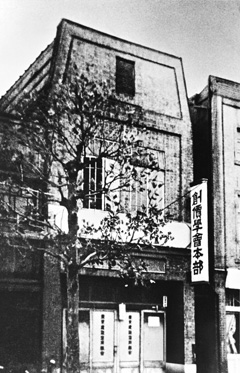 Toda was released from prison in July 1945, after two years of imprisonment. His time behind bars had resulted in severe malnutrition and deterioration in his eyesight. In addition, the organization of Soka Kyoiku Gakkai (the forerunner of the Soka Gakkai) was in complete disarray because most of the leaders had abandoned their faith as a result of the oppression by the wartime regime. However, not waiting for his strength to recover, Toda launched the effort to reconstruct the organization from the day after his release. He was motivated by the knowledge that his mentor, Tsunesaburo Makiguchi, had sacrificed his life for his beliefs, and he determined to dedicate the rest of his life to developing the organization. Toda, as director general, was the effective leader of the Soka Kyoiku Gakkai in the absence of a president.

In November 1945, at a memorial service to mark the first anniversary of Makiguchiʼs death, Toda spoke of his determination:

“The Bodhisattvas of the Earth described in the sutras exist nowhere but here. We are they! Of this I am certain. I declare that I, Josei Toda, will work to propagate Buddhism, even if I am alone in this effort.”

Toda first had to rebuild his business, which had been devastated by the war, to establish the economic foundation on which to base his efforts for religious reformation. With this in mind, he launched a publishing company and other enterprises. 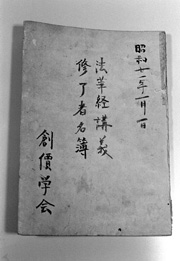 Register of attendance and completion
of the Lotus Sutra lectures that began
January 1, 1946

From January 1, 1946, Toda started to lecture on the Lotus Sutra to four of his business partners who were also members of Soka Kyoiku Gakkai. When this lecture series was completed in March, Toda came to think that rather than focusing on people who worked in the field of education, as the original Soka Kyoiku Gakkai had done, the organization should make Buddhist philosophy, with its emphasis on human dignity, accessible universally, throughout society. To express his determination to work to achieve world peace by enabling every single person, men and women of ages and walks of life, to attain happiness, he dropped the word Kyoiku (education) from the organizationʼs name, renaming it the Soka Gakkai (society for the creation of value).

In May 1947, when the first postwar Leaderʼs Meeting was held, no more than a dozen members attended, but they discussed plans for the reconstruction of the Soka Gakkai, and the magazine Kachi sozo (Value Creation) was revived in June. 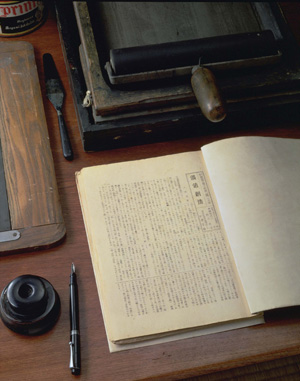 The reconstruction of the Soka Gakkai after the war centered on Todaʼs lectures on the Lotus Sutra and discussion meetings held in various locations, led by young people who had attended his lectures. These meetings marked Todaʼs first steps toward the large-scale propagation of Buddhism.