Josei Todaʼs early years were spent as an educator, and it was in that capacity that he encountered the man who was to become his mentor, Tsunesaburo Makiguchi. Makiguchi had for many years been working on a new educational theory, Soka (value-creating) education, and Toda became a passionate advocate of his ideas. Soka education places stress on the happiness of the children, seeking to develop their interests and capacities, rather than the rote-learning that was prevalent in Todaʼs day. 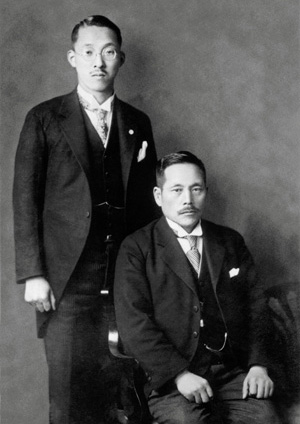 Toda set up a tutorial school, Jishu Gakkan, in which he put many innovative ideas into practice, and published textbooks based on his classroom methods and materials. The school earned a strong reputation, while one textbook, on arithmetic, was a huge long-seller, selling more than a million copies.

Nevertheless, due to Makiguchiʼs death in 1944 while imprisoned by Japanʼs militarist government, together with Todaʼs financial instabilities after the war, there was a danger that the theory of value-creating pedagogy might disappear. Mindful of Makiguchiʼs desire to establish a school system based on his Soka education theories, Toda took pains to ensure that his own chosen successor, Daisaku Ikeda, would inherit that vision, and within 10 years of Todaʼs death the first of the Soka schools were being opened under Ikedaʼs leadership.