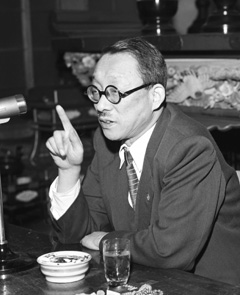 When Josei Toda was released from prison shortly before the end of the war, the organization he and Makiguchi had created was in disarray. Many members had abandoned faith, and the first postwar meeting was attended by just a dozen members. Todaʼs own health was damaged and his financial situation was fragile. However, by the time of his death in 1958, he had reconstructed the organization into a vital, dynamic body with a membership of more than 750,000 and the structures in place to ensure continued expansion and development into the future.

This was the result of a single-minded determination and a refusal to succumb to adversity. From the moment he was released, he set about rebuilding the Soka Gakkai, and was soon lecturing and engaging in dialogue on a daily basis. For many years, Toda was beset by financial difficulties, and yet even at his lowest ebb he was still proposing expansive new ideas.

It was not until 1951 that Toda assumed the presidency, having first resolved his personal business problems and achieved a recovery in membership. In the remaining years of his life, as the Soka Gakkaiʼs membership grew dramatically, he organized its structure and its activities and created the infrastructure of guidance and encouragement that survive to this day. His ideas were frequently radical: he placed great emphasis on the roles of women and of youth, in stark contrast to prevailing trends in Japanese society.

By the time he passed away in 1958, he had laid a solid foundation for revitalizing Buddhism, for a movement which would become a vibrant presence in the modern world.