On an individual level, the vision of kosen-rufu toward which Toda was striving involved the construction of a state of life of indestructible happiness through the process of human revolution. On a broader societal level, it meant building a peaceful society through the contributions to their families and local communities made by individuals as they continue to transform their own lives. It can also be said that kosen-rufu is a movement, based upon Buddhist humanism, for reform in all aspects of society, including culture, education, the economy and science, in order to bring human concerns to the fore in each of these fields of endeavor. One arena of society Toda felt was particularly in need of this kind of reform was that of politics. 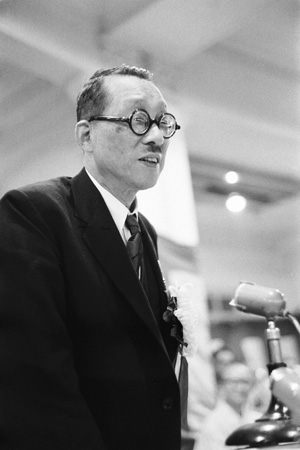 Toda encouraging members to contribute
to their communities, 1957

Because of his opposition to the militarist authorities that sought to impose totalitarian control over all aspects of Japanese life during World War II, Toda had been imprisoned for two years. From this experience, Toda had a deep awareness of the dangers of political authoritarianism which had constrained and oppressed the entire Japanese people, driving the country into wars of overseas aggression. And even after the war, the political system was chronically corrupt, with various political parties competing for political advantage, resulting in sterile political infighting with no thought for the needs of the people.

In view of this, Toda frequently exhorted Soka Gakkai members to follow political developments carefully. He urged young people, in particular, to keep an attentive eye on politics.

Toda was concerned that the Japanese people had often shown a pronounced tendency toward political apathy and subservience to authority. As a result, there was a strong danger that the corruption of the political world would continue unchallenged. To prevent this, he was determined to instill in young people a spirit of principled and critical engagement.

The postwar Japanese political system consisted of conservative parties representing the interests of large corporations and reformist parties representing those of organized labor. But the voices and interests of such disempowered sectors as small businesses and unorganized labor found little representation. Rather, the two major political blocs tended to align themselves with the respective sides of the Cold War and engage in barren ideological disputes, with no thought for the real needs and interests of the people. Corruption was also rife throughout the system.

Keenly aware of the realities of the political world, Toda thought long and hard about the question of whether the Soka Gakkai should become directly involved in politics. He knew that any such involvement would invite baseless criticism and speculation, that it could be misrepresented as an attempt by the Soka Gakkai to establish Nichiren Shoshu as a state religion or to somehow seize power. Nevertheless, in the end, in view of the deplorable state of Japanese politics, Toda decided it was necessary to nurture politicians from within the Soka Gakkai who would work in the realm of politics to represent the interests of the common people. This would ensure that the political process would be more responsive to the voices of the people, reflecting their needs in policies.

To this end, in April 1955 the Soka Gakkai for the first time officially endorsed candidates for the national parliament, marking the beginning of the Soka Gakkaiʼs political involvement.