While enduring imprisonment at the hands of Japan's militarist authorities during World War II, Toda experienced a religious awakening or enlightenment. He gained a deep understanding of the nature of life as revealed in the Lotus Sutra--that all life is endowed with an inalienable dignity (Buddha nature) and is connected in a profound interrelatedness. He also attained a clear vision of his mission or purpose in life. 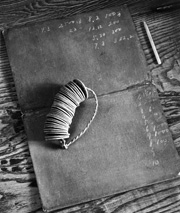 Prayer beads Toda made from
milk-bottle tops while in prison,
and a slate on which he kept
a record of the daimoku he
chanted in prison

He set about reconstructing the Soka Gakkai in the postwar years, developing a revolutionary approach to Buddhism, often in stark contrast to the conventions of traditional schools of Japanese Buddhism. He believed that religious faith and practice should be applied directly to the real and pressing problems of daily living. His approach would today be described as the development of a grassroots religion of empowered individuals. Such an approach to religion was radical in its time and remains so to this day.

At the core of his philosophy lies the concept of "Human Revolution," a process of personal transformation that allows each individual to achieve a life of absolute happiness. Because of the awareness of the interrelatedness of all life, the human revolution of a single individual will positively affect that individual's environment and, ultimately, the destiny of all humankind.

This vision of empowerment now forms the core of the beliefs and activities of the SGI and its millions of engaged Buddhist practitioners around the world.