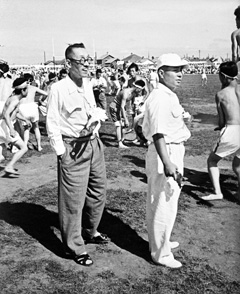 With Ikeda at a youth division sport event, 1957

Toda stressed the importance of the mentor-disciple relationship in the practice of Buddhism within the Soka Gakkai. Through his own example, with Makiguchi as his mentor and Daisaku Ikeda whom he was training as his closest disciple and successor, he revitalized the Buddhist philosophy of the mentor-disciple relationship for the contemporary age. This spirit of learning from the mentor has been taken up by the members of the Soka Gakkai and the SGI in the form of the teaching of the oneness of mentor and disciple.

Together with Makiguchi, Toda was imprisoned by the militarist authorities that suppressed freedom of religion during the war. But Toda actually was full of gratitude to his late mentor for this experience, through which he was able to develop unshakable conviction and faith, stating: "It was thanks to your immeasurable compassion that you took me with you to prison."

Meanwhile, Toda placed complete confidence and faith in his own disciple, Ikeda, and for about 10 years he taught him extensively on a one-to-one basis, entrusting him with the entire responsibility for kosen-rufu (lasting peace throughout the world). Without Ikeda as his disciple, it is unlikely that the plans that grew from Toda's cherished desire to rid the world of suffering would ever have been realized. It is because these ideas did not remain as mere ideas, but were inherited by Ikeda as Toda's vibrantly enduring spirit, that the present-day achievements of the Soka Gakkai and the SGI have been possible.

The mentor-disciple relationship has always been a key to Buddhist practice. In the Lotus Sutra, Shakyamuni exhorted his disciples to always practice the sutra true to the spirit in which it was taught. But the aim of the mentor-disciple relationship in Buddhism is not that the mentor exacts obedience from the disciple, but that the mentor seeks to train the disciple to achieve an even greater state of development than that of the mentor. 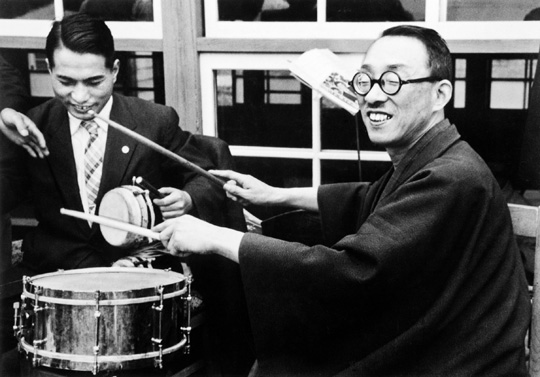 In his Great Concentration and Insight, the sixth-century Chinese Buddhist teacher T'ien-t'ai used the phrase "from the indigo, an even deeper blue." This employs the example of the ancient process of dyeing cloth using a blue dye made from the indigo plant, where the dyed cloth takes on a deeper blue than the plant from which it was derived due to repeated immersion in the dye. In the same way, if the mentor is likened to the indigo plant, by absorbing the mentor's teachings, the disciple can achieve an even more splendid "blue." This illustrates that the ultimate goal of the relationship is to enable the disciple to surpass the mentor.

Nichiren repeatedly stressed the importance of this philosophy of the mentor-disciple relationship as one of the core teachings of Buddhism. This was because, however much the Lotus Sutra might teach the concept of universal human salvation, these remain empty words unless there are people who are actually putting the teaching into practice. In particular, even though religion can be said to exist for the sake of ensuring human happiness, there is an inherent danger that in fact people will become downtrodden by religious authorities. This makes the mentor-disciple relationship even more essential. This is not a matter of dogma or ritual: it is the transmission of the mentor's spirit, a burning desire to help people achieve happiness. Because learning takes place through human interaction, through the lived example of the mentor, the relationship between mentor and disciple is the most noble means of inheriting the spirit of Buddhism.