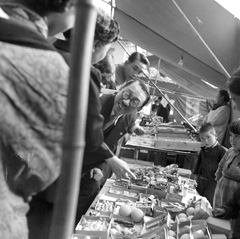 Toda described religious practice as carrying out a deep-seated transformation in one's life, as well as striving to transform one's circumstances from poverty to prosperity and from sickness to good health. Toda defined this overall process as "Human Revolution." Internal transformation is the key to all change, and every individual possesses the potential for this transformation. If we can become aware of this fundamental fact of life, we will be able to release that potential, whatever circumstances we may be facing. By transforming our own way of life, we are able to activate the Buddha nature inherent in every life, and reveal our boundless potential.

The Buddhist philosophy laid out by Toda was extremely practical and innovative. It sharply contrasted with the clergy-centered approach of traditional Buddhist schools, an approach that criticizes lay values from a standpoint detached from the secular world.

There is a strong tendency in traditional Japanese Buddhism for priests to monopolize the scriptures and doctrinal matters. Lay believers usually assume a passive role, delegating actual Buddhist practice (such as the recitation of the sutras) to priests. In contrast, under Toda, the Soka Gakkai emphasized, in addition to the chanting of Nam-myoho-renge-kyo, the recitation of the essential chapters of the Lotus Sutra (gongyo), in a standardized format that could be practiced by anyone.

As a result, lay believers were empowered to engage in Buddhist practice that had previously been considered the exclusive province of priests. Toda also took the initiative in publishing a collection of Nichiren's writings for the first time, making it possible for members to seek out and study Buddhism on their own. Study exams were launched to inspire active and inner-motivated faith among the membership. The aim was to foster members' understanding of the connection between Buddhist practice and their own lives, which would motivate them to take action in order to contribute to creating a better world. 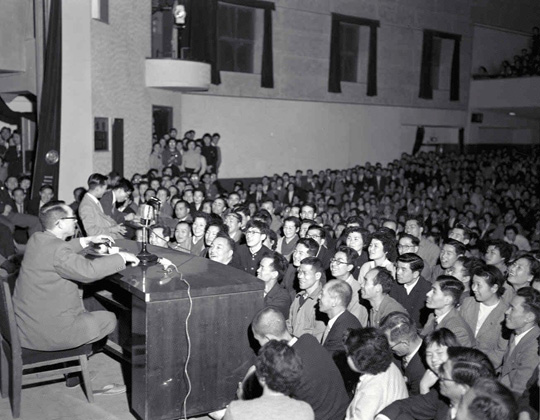 Lecturing on the writings of Nichiren

Toda asserted that religious faith was inextricably linked to daily life, not a game of abstract theories. Buddhism pulsates in the lives of those who stand up and take action. One must first believe in one's potential, bring it out fully, and break through one's limitations in order to grow stronger. People are enabled to develop themselves through engaged interaction with others. This approach to life embodies the spirit of practicing for oneself and others and clarifies the meaning of propagation, of actively sharing Buddhism with others.

Susumu Shimazono, professor of sociology of religion at the University of Tokyo, comments that Toda's reform of religious thought can be described as oriented toward secular salvation because it does not deny the secular world but subjects it to reform and links it to salvation. He also points out that Toda's insight that the Buddha is life itself made it possible to infuse modern ideas into traditional Buddhist teachings.

Toda's revolutionary view of religion has served as a powerful driving force behind the Soka Gakkai's engagement with the realities of human society, encouraging large numbers of people to embark on their own, personal human revolution.