After taking up his post as second President of the Soka Gakkai, Toda focused on revitalizing the organization.

As Toda wished each and every member to grow by inspiring each other through dialogue, he positioned discussion meetings, which had started in the days of his mentor, Tsunesaburo Makiguchi, as the Soka Gakkai's mainstay activity. At the discussion meeting, everyone could freely share their experiences and thoughts on faith, and actively take part in the study of Nichiren Buddhism. The discussion meetings thus enabled people to vividly appreciate the importance of faith. 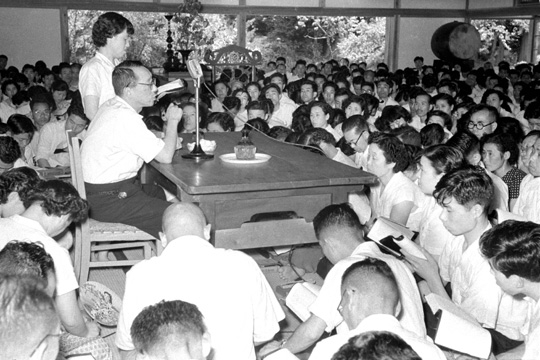 Lecturing on the writings of Nichiren, 1954

In 1951, so that members would be able to gather in small groups for meetings, Toda put together a basic organizational unit called the chapter, which contained smaller sections called districts. In the following year, due to the increase in membership, he formed even smaller groups and units within the districts, each consisting of no more than a dozen or so people. This structure allowed the members to receive thorough support in all aspects of faith through guidance and encouragement.

In addition, Toda made substantial reforms to the way members studied Buddhist philosophy. He had inaugurated his series of lectures on the Lotus Sutra in 1946, the year after his release from prison, and repeated the lecture series 10 times in the years to 1950. Toda placed such a high priority on these lectures because he had learned, through the example of the leaders who had abandoned their faith while imprisoned by the wartime authorities, how frail faith can be when it is not corroborated by a clear understanding of Buddhist teachings.

Toda (back right) with members sitting the
Study Examination, December 1952

From 1951, when Toda assumed the presidency, a renewed focus was placed on the study of the writings of Nichiren. A study division was founded and members were encouraged to sit exams based on Nichiren's writings. The exams, classified in five grades with Grade 1 for beginners to Grade 5, the highest, were launched in December 1952, and from then on were held every year, allowing members to actively study Buddhism and gain conviction in faith.