Having thoroughly explained the true meaning of propagation, Toda placed great emphasis on discussion meetings as a venue where this “act of compassion” and the spirit of jigyo-keta (practice for oneself and others) could be put into practice. 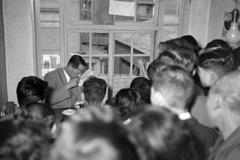 Discussion meetings—one of the traditional activities of the Soka Gakkai dating back to the days of its first president, Tsunesaburo Makiguchi—are gatherings of small numbers of members and guests, and consist of a study session on the writings of Nichiren, membersʼ experiences of faith, and guidance from leaders to encourage the attendees to utilize the strength and wisdom derived from their practice of faith to confront and overcome their problems.

The discussion meeting, a tradition that continues to this day, provides a forum where members and their friends can exchange candid opinions. It is a forum for propagation and dialogue open to society. Attended by men and women of all ages and walks of life and with no discrimination on the basis of social position or wealth, it offers empathy and encouragement to those weighed down by their troubles, and an opportunity to share reports of having triumphed over adversity. 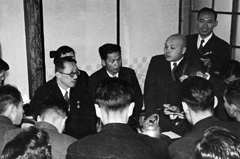 One of the key elements of a discussion meeting has always been membersʼ experiences of faith. The reason Toda stressed membersʼ experiences was his understanding that without the tangible experience of having transformed oneʼs daily life and overcome problems, there was a danger that discussion of Buddhism would remain in the realm of empty rhetoric. The experiences of faith delivered by Soka Gakkai members at discussion meetings served as proof of the benefits of a life based on faith and of the immense potential of human life. In addition, these examples of people facing hardships head-on offered courage and hope to the listeners as well as proof of the power of Buddhist practice. 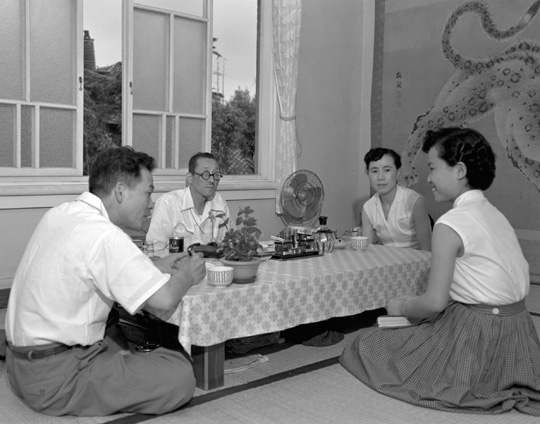 Toda himself constantly attended discussion meetings, talking with guests about Buddhism and using examples from everyday life to explain how participants could overcome the problems they were facing through Buddhist practice. Toda never set himself above the members, speaking to all on a basis of equality, embodying the very spirit of the discussion meeting through his frank exchanges. Iichi Oguchi, professor of the sociology of religion at the University of Tokyo, wrote of Toda as follows: “Many gurus lead an aristocratic lifestyle—sometimes because they themselves seek it, sometimes because of the wishes of those around them. But Toda is never extravagant and never puts on a self-important air.”

Discussion meetings were held throughout Japan, and as an understanding of the profundity and joy of sharing Buddhism with others spread among the members under Todaʼs guidance, propagation efforts gained steady momentum, until several tens of thousands of households were taking faith every month. In December 1957, just six years and seven months after Toda assumed the presidency, a membership of 755,000 households was achieved.