By Josei Toda, second president of the Soka Gakkai

I would now like to share with you what I hope you will regard as the foremost of my instructions for the future.

As I have long said, the responsibility for the coming era must be shouldered by the youth. ... Today I would like to state clearly my feelings and attitude regarding the testing of nuclear weapons, a topic that is currently being debated heatedly throughout society. I hope that, as my disciples, you will inherit the declaration I am about to make today and, to the best of your ability, spread its intent throughout the world.

Although a movement calling for a ban on the testing of atomic or nuclear weapons has arisen around the world, it is my wish to go further, to attack the problem at its root. I want to expose and rip out the claws that lie hidden in the very depths of such weapons. I wish to declare that anyone who ventures to use nuclear weapons, irrespective of their nationality or whether their country is victorious or defeated, should be sentenced to death without exception.

Why do I say this? Because we, the citizens of the world, have an inviolable right to live. Anyone who jeopardizes that right is a devil incarnate, a fiend, a monster. I propose that humankind applies, in every case, the death penalty to anyone responsible for using nuclear weapons, even if that person is on the winning side.

Even if a country should conquer the world through the use of nuclear weapons, the conquerors must be viewed as devils, as evil incarnate. I believe that it is the mission of every member of the youth division in Japan to disseminate this idea throughout the globe. 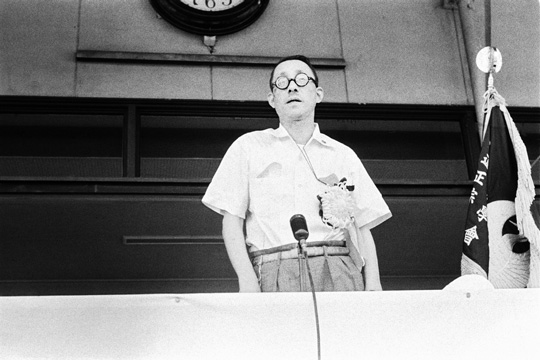 Toda calls for the abolition of nuclear weapons at Mitsuzawa Stadium, Yokohama, September 8, 1957