Josei Toda made his historic declaration calling for the abolition of nuclear weapons on September 8, 1957, at a meeting of 50,000 members of the Soka Gakkaiʼs youth division at Mitsuzawa Stadium, Yokohama.

Toda at a meeting of 50,000 members of the youth division at Mitsuzawa Stadium, Yokohama, September 8, 1957

The key part of the declaration reads as follows:

“Although a movement calling for a ban on the testing of nuclear weapons has arisen around the world, it is my wish to go further, to attack the problem at its root. I want to expose and rip out the claws that lie hidden in the very depths of such weapons. I wish to declare that anyone who ventures to use nuclear weapons, irrespective of their nationality or whether their country is victorious or defeated, should be sentenced to death without exception.

Why do I say this? Because we, the citizens of the world, have an inviolable right to live. Anyone who jeopardizes that right is a devil incarnate, a fiend, a monster. ...

Even if a country should conquer the world through the use of nuclear weapons, the conquerors must be viewed as devils, as evil incarnate. I believe that it is the mission of every member of the youth division in Japan to disseminate this idea throughout the globe.” 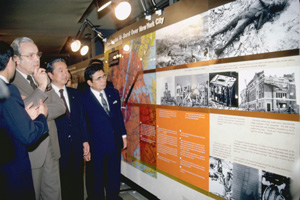 Toda denounced those who would use nuclear weapons as “devils” in the Buddhist sense of “robbers of life” and nuclear weapons themselves as the embodiment of absolute evil. His stance was that nuclear weapons and their use must be absolutely condemned, not from the standpoint of ideology, nationality or ethnic identity but from the universal dimension of humanity and our inalienable right to live.

Toda was a consistent opponent of the death penalty, as he had made clear on other occasions. His call for the death penalty in condemning nuclear weapons was an expression of his outrage at those who would utterly violate the supreme value of lifeʼs inherent dignity and deny people their fundamental right to existence. Through his choice of language, he expressed his determination to challenge and to pass a “death sentence” on the demonically destructive tendencies within human life.

“Inside second Soka Gakkai President Todaʼs heart, the authoritarian power of the militarist clique before the war and the power of the superpowersʼ nuclear arsenals overlapped with each other. He must have seen the nuclear weapon as the same unreasonable, devilish authority as the military clique that had trampled the desire for peace and freedom of religion, and brought oppression and hardship in prison upon Toda himself. This therefore led to his straightforward confrontation against ‘absolute evil’ and the fundamentally uncompromising battle against those who threaten peopleʼs right to live. And here lies the discernment of a man of religion for a new era.” 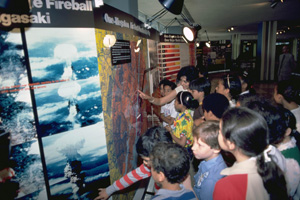 The “Nuclear Arms: Threat to our World” exhibition
at the United Nations Headquarters, New York, 1982

Todaʼs statement initiated an uncompromising struggle against the demonic aspect of life, the unseen enemy that gave birth to nuclear weapons. His appeal to young people to take up this challenge stands today as the starting point for global peace activities of the Soka Gakkai.