In January 1940, Toda launched a monthly magazine, Shogakusei Nihon gonen (Elementary Studentsʼ Japan—Fifth Graders), targeted at schoolchildren and aiming to provide them with stimulating reading matter. This was a remarkable achievement.

During wartime Japan, magazines and other publications designated as “not urgent and/or needless” were banned in the name of “saving paper.” Even existing publications were forced to discontinue or merge. In order to publish a new magazine it was necessary to align oneself with national policy and include articles supporting the views of the militarist state.

Nevertheless, Toda was determined to publish a magazine that accorded with his educational vision, which, under such circumstances, seemed virtually impossible. Toda never lost sight of the happiness of children and the goal of providing a type of education that would achieve this. It is a testament to his persistence and determination that, even while Japan was at war, Toda was able to plan and publish a study magazine for children. 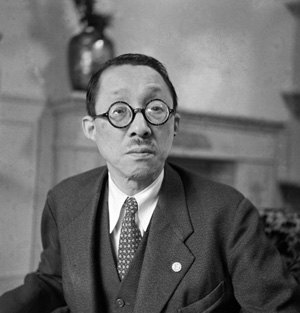 At the Soka Gakkai Headquarters, 1953

Toda found ways to circumvent the censors. For example, if a magazine contained articles written by soldiers returning from the warfront, it was possible to get potentially problematic material past the censors. Toda therefore called for assistance from returning soldiers, finding among them contributors of rich humanity. Eventually he was able to convince the relevant authorities and succeeded in bringing out the new magazine in January 1940.

In the first few issues, the contents page listed several articles whose “heroic” titles were typical of wartime Japan; but articles related to the war disappeared within a few issues. For the remainder of its lifetime, the magazine was filled with articles that turned childrenʼs vision outward to the rest of the world. Stories on Europe and reports that illustrated the cultural and industrial achievements of other countries filled the pages. In one serialized novel about the war, characters even expressed the idea—utterly heretical at the time—that war was neither glorious nor spectacular.

This was an immensely difficult challenge during a period when political awareness was predicated on uniformity, as expressed in the slogan “Ichioku isshin (One hundred million people, one heart).”

Ryuji Takasaki, an expert on wartime journalism, writes as follows:

“This could not be done by some ordinary individual. This could not be achieved unless one had not just courage, but the readiness to experience persecution. There was probably no one else who could do such a thing under those circumstances.”

Toda succeeded in publishing this magazine for two years, later renaming it Shokokumin Nihon (Young Citizens), until it was forced to discontinue in April 1942 as the war intensified. His determination and achievements at this time have come to be recognized by later generations as a valiant effort in the battle to protect the freedom of speech.