During World War II, Toda faced severe oppression at the hands of the Japanese military government, whose aim was to seize ideological control over all walks of life. In holding fast to his religious beliefs regardless of his personal privations, he was standing up for the freedom of religion in the face of state oppression. 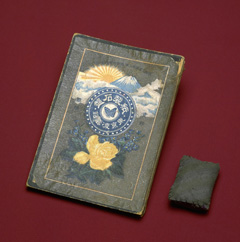 A chalkboard slate and eraser
Toda used in prison

After Japan emerged into the modern world during the second half of the 19th century, its effort to join the ranks of advanced nations was accompanied by an irresistible slide into imperialism. By the mid–1930s, Japan was engaged along a never-ending, chaotic battlefront in mainland China; seeking avenues of advance, the war was expanded into Southeast Asia, and Japan eventually waged war on the United States in December 1941.

As the military government pursued its policy of total war, it attempted to take control not only of economic and political activity but of all aspects of ideology and religion. To enforce State Shintoism and imperialistic ideology, the authorities compelled the people of Japan to worship a talisman issued by the Ise Shrine that venerated imperial ancestors. Any individuals or groups who resisted these efforts were strictly oppressed for violating the Peace Preservation Law and disrespecting the emperor. 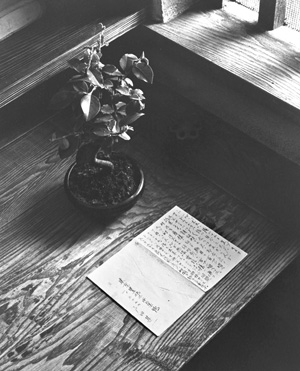 A letter Toda wrote his family from prison

Makiguchi and Toda had started to practice Nichiren Buddhism in 1928, becoming lay believers affiliated with the Nichiren Shoshu school. Soka Kyoiku Gakkai, the organization they created to promote the value-creating educational theories they had been developing over the years, gradually evolved into a body with a wider goal of reforming society, specifically through the reform of religion and promoting the practice of Nichiren Buddhism.

In June 1943, the Nichiren Shoshu priesthood, fearing the oppression of the military government, summoned Makiguchi and Toda to the head temple and advised them to instruct the members of Soka Kyoiku Gakkai to receive the talisman. However, Makiguchi firmly refused to follow their advice, stating they would never accept the talisman, and personally confronted Nikkyo, who was the high priest at that time, claiming, “Now, surely, is the time to remonstrate with the government!”

Makiguchi and Toda tenaciously maintained their religious convictions. In doing so they sought to remain faithful to the spirit of Nichiren, who in his time had condemned attempts by secular authority to regulate the inner lives of the people—as Japanʼs militarists were now doing in pursuit of the war effort—and the clergy who colluded with them in this. However, the high priest refused to heed Makiguchiʼs words, and as soon as the suppression of Soka Kyoiku Gakkai started, Nichiren Shoshu prohibited the organizationʼs leaders from conducting pilgrimages to the head temple. Refusing to receive the talisman ultimately brought about the detention of Makiguchi and Toda by the Japanese thought police.

“In the days when Japanese society was completely dominated by militarism, it was natural for any group to be treated as an implacable enemy if they stayed true to Nichirenʼs admonition to correct the stateʼs wrongdoings and remonstrate with the government, and upheld the idea that the purpose of life was for each individual to actively develop the [values of] virtue, beauty and gain.” 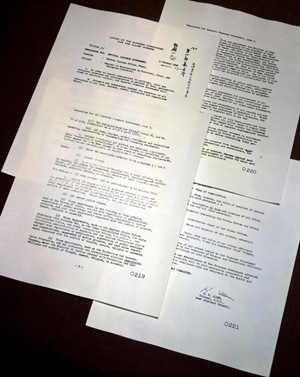 In July 1943, Toda was detained at his home in Meguro, Tokyo. He was held in a three-mat cell (about three square meters) for the next two years. Life in prison was very severe. Toda was secluded from the outside world, allowed no visits from his family, and letters were the only method of communication. In addition, Toda suffered from severe malnutrition during the two years he spent in prison. Unable to endure such arduous conditions, the 21 detained leaders of Soka Kyoiku Gakkai backslid in faith one by one, with the exception of Makiguchi and Toda.

Despite such extreme circumstances, Toda persisted in his faith. When he was in need of a set of prayer beads (juzu beads), he created one by stringing together the caps from milk bottles that were part of his rations. He chanted Nam-myoho-renge-kyo 10,000 times every day and intensively read the copy of the Lotus Sutra that was sent to him in prison. He even strove to convert the warden, evidence that even in prison, Toda never abandoned his faith or his determination to protect freedom of religion.