At the end of 1919, during a visit to Tokyo, Toda was introduced by an acquaintance to Tsunesaburo Makiguchi (1871–1944), then principal of Tokyoʼs Nishimachi Elementary School. They had a long discussion on educational practice and research. Shortly afterwards, Toda resigned from Mayachi Elementary School and came to live in Tokyo where, with the help of Makiguchi, he was hired to work for three months as a temporary teacher at Nishimachi Elementary School. Around this time, to mark the start of a new stage in his life, he assumed the name Jogai. For the next 23 years, Toda worked with Makiguchi, considering him his mentor, until they were both imprisoned during World War II. 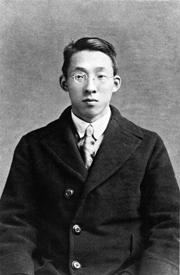 Toda in 1923, when Jishu Gakkan
was established

In July 1920, Toda accompanied Makiguchi when he was transferred to Mikasa Elementary School. When Makiguchi was again transferred to a new school during 1922, Toda decided to bring his career as an elementary school teacher to an end, and in 1923 he opened a private school, later named Jishu Gakkan, for elementary students studying for the highly competitive entrance examination for secondary-level education.

In 1922, Toda married Tsuta Urata, and their daughter, Yasuyo, was born the next year. However, she died of tuberculosis at age one. In November 1926, Tsuta also died of tuberculosis, aged 32: Toda too contracted the disease. In April 1925, he enrolled in Chuo Universityʼs preparatory course, which he completed in April 1928, entering the universityʼs Faculty of Economics.

Around June 1928, Makiguchi, discovering a close affinity between Nichiren Buddhism and his own philosophy, took faith in it. Some time afterwards, Toda followed his mentor and began practicing Buddhism.

In 1929, Toda established a publishing company, Jobun-do. In December, he published his first book, On the Secondary Education Entrance Exam and Developing Your Beloved Child into a Superior Student.

In 1930, in a discussion with Makiguchi, Toda suggested the name “Value-Creating (Soka) Pedagogy” for the educational theory Makiguchi had been developing throughout his career. In June 1930, Todaʼs work A Deductive Guide to Arithmetic was published, becoming a long-seller with total sales of over a million copies.

On November 18, 1930, Toda published the first volume of The System of Value-Creating Pedagogy, one of Makiguchiʼs major works. As Makiguchiʼs disciple, Toda poured his heart and soul into realizing the publication of his mentorʼs work. The publication of the first volume marks the foundation of Soka Kyoiku Gakkai (Value-Creating Education Society, the forerunner of the Soka Gakkai) by Makiguchi and Toda. 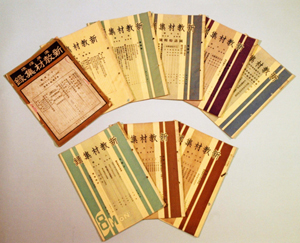 In 1930, Toda launched an educational magazine Shinshin kyozai kankyo (A Progressive Environment for Teaching Materials), which was renamed Shin kyozai shuroku (New Teaching Materials) in 1932. Its title was later changed again to Shinkyo (New Teaching), and it became Soka Kyoiku Gakkaiʼs organizational publication. In 1934, Toda established Nihon Shogakkan, another publishing company; he was also completely cured of tuberculosis around this time, after a 10-year struggle. In February 1935, he married his second wife, Ikuko Matsuo. Their son, Takahisa, was born in November 1935.

By this time, Japan was mired in a war of aggression on a broad front across mainland China and was soon to attack Pearl Harbor and enter World War II. All aspects of Japanese society had been brought under the central control of the militarist government. Makiguchi and Toda, however, dedicated themselves to establishing Soka Kyoiku Gakkai and developing it into a movement for educational and social reform based on the practice of Nichiren Buddhism. Its membership reached a peak of around 3,000 before the wartime government moved to suppress it, as part of its efforts to eliminate all forms of dissent.

In June 1943, the administrative office of Nichiren Shoshu (the Buddhist sect to which Toda and Makiguchi were affiliated) advised them to accept a Shinto talisman, worship of which was being enforced by the militarist authorities in order to promote the war effort. Makiguchi and Toda adamantly refused to do so. About a week later, Toda was detained at his home in Tokyo on charges of violation of the Peace Preservation Law, which was used to define and suppress “thought crimes,” and showing disrespect to the Japanese emperor. On the same day, Makiguchi was also detained in Shizuoka Prefecture. A total of 21 Soka Kyoiku Gakkai leaders were also arrested.

Todaʼs final encounter with Makiguchi came in September 1943, within the Metropolitan Police Department, while Makiguchi was being transferred to the Tokyo Detention House in Nishi-Sugamo: Todaʼs final words to his mentor were the simple cry, “Sensei, please look after your health.” In October, Toda was also transferred to the Tokyo Detention House, where he was kept in solitary confinement.

Starting in January 1944, while still in prison, Toda carefully read the Lotus Sutra, the key scripture of Nichiren Buddhism. In early March, he had the realization that what is referred to as the “entity of the Buddha” is nothing other than life itself—a dramatic reformulation of Buddhist thought. In mid-November, he experienced an awakening to his mission to propagate Buddhism for the benefit of all people.

A letter from prison to his wife, Ikuko

On January 8, 1945, he was informed that Makiguchi had died in the prison infirmary the previous year. For Toda, the death of his mentor at the hands of the militarist authorities was an outrageous crime, which he could never forgive or forget.