In July 1945, Toda was provisionally released with the charges against him still pending. After his release, he again changed his given name, from Jogai (lit. “outside the castle”) to Josei (lit. “sacred castle”). He reestablished the offices of his company Nihon Shogakkan, and began offering a correspondence course program. In October, under the U.S. Occupation administration, the Peace Preservation Law was abolished, removing all charges against him.

Early in 1946, Toda began lecturing to some colleagues on the Lotus Sutra, and in May 1946 he changed the name of the organization from Soka Kyoiku Gakkai (Value-Creating Education Society) to Soka Gakkai (Society for the Creation of Value), with its headquarters on the second floor of the Nihon Shogakkan office. While carrying on with the tradition of discussion meetings begun by first president Makiguchi, he devoted himself to propagation efforts and providing personal guidance to members, now facing severe challenges in rebuilding their lives amid the chaos and economic devastation following Japanʼs defeat. In August 1947, he met Daisaku Ikeda, who would be his successor, at a discussion meeting where he was lecturing.

In 1946 and 1947, Toda published study aids and childrenʼs picture books with Japanese and English texts on facing pages, a natural continuation of his passion for childrenʼs education. In January 1948, he started a monthly boysʼ magazine Boysʼ Adventure as editor-in-chief and publisher. In January 1949, Ikeda began to work for Nihon Shogakkan, and from January 1950 Toda started to privately tutor Ikeda, who had given up his university studies in order to support Todaʼs businesses. 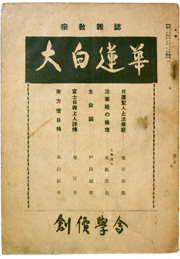 In July 1949, Toda launched the Soka Gakkaiʼs study journal Daibyakurenge, contributing a treatise “On Life” to the first edition.

In spring of the same year, he became executive director of Tokyo Kensetsu Shinʼyo Kumiai, a credit association. In October, Boysʼ Adventure was renamed Boysʼ Japan. The magazine, however, was discontinued after the December issue due to the revival of major magazines, and Toda was forced to withdraw from the publishing business.

From around the spring of 1950, the performance of Todaʼs credit association fell into decline and its business operations were suspended. In August, Toda announced he was stepping down from his position as general director of the Soka Gakkai in order to prevent his business problems from negatively impacting the organization. In October, he established the finance and insurance company Okura Shoji in an effort to restore his business fortunes. 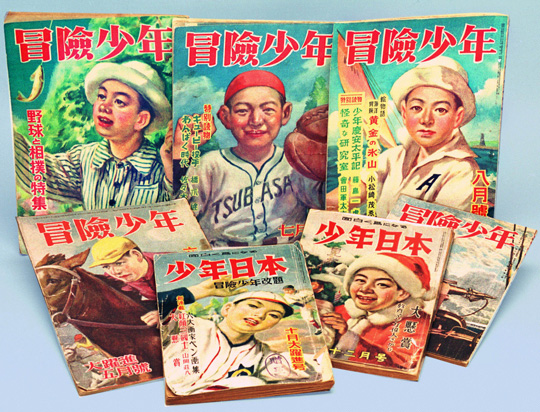