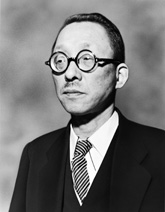 Josei Toda (1900–58) was the second president of the Soka Gakkai, one of Japanʼs most influential lay Buddhist movements.

Based on the teachings of the 13th-century Buddhist reformer Nichiren (1222–82), Toda developed a methodology of personal transformation called “Human Revolution” that has become the foundation underlying the Soka Gakkai, a worldwide organization of engaged Buddhists promoting peace and personal empowerment throughout the world.

The early years of Todaʼs career were spent as a teacher. At the age of 19, he encountered his mentor, Tsunesaburo Makiguchi (1871–1944), also an educator. Makiguchi was developing an educational theory (value-creating pedagogy) that was in stark contrast to the methods in use in Japan at the time, placing priority on the happiness of the children and inspiring in them the will to study, rather than the educational orthodoxy that sought to produce obedient subjects of the state. Toda became his enthusiastic helper and supporter in this endeavor. It was Toda who actualized many of Makiguchiʼs ideas, founding a school where innovative educational theories were implemented in classroom situations. Toda helped Makiguchi publish his major work, The System of Value-Creating Pedagogy.

In 1928, Makiguchi embraced Nichiren Buddhism. Its emphasis on human dignity was also consistent with Todaʼs own beliefs, and he too subsequently took faith. The publication in 1930 of The System of Value-Creating Pedagogy is recognized as the foundation by Makiguchi and Toda of an organization called Soka Kyoiku Gakkai (Value-Creating Education Society), whose original aim was to promote Makiguchiʼs value-creating educational theories. The organization steadily developed into a body promoting social and religious reform through the practice of Nichiren Buddhism, seeking to empower ordinary people to become self-reliant individuals.

Japan, however, had by this time embarked on a program of military expansion in Asia which culminated in its involvement in World War II. The militarist authorities viewed Soka Kyoiku Gakkai as a threat to their attempts to impose religious and thought control, and in 1943 Toda was detained along with Makiguchi and other leaders of the organization. Makiguchi died in prison while Toda was released shortly before the end of the war; both remained steadfast in their faith till the end. The experience of imprisonment was crucial in awakening Toda to his mission to encourage the widespread practice of Nichiren Buddhism in order to build the foundations for a peaceful society.

After emerging from prison, Toda set out to rebuild Soka Kyoiku Gakkai, which had been crushed during the war. The organization was now renamed Soka Gakkai (Society for the Creation of Value), a move that reflected a broad commitment to realizing global peace and the well-being of people of all walks of life and empowering individuals through Buddhist practice.

As second president, Toda developed the Soka Gakkai into one of Japanʼs most significant lay Buddhist associations, setting the stage for its growth into a dynamic worldwide grassroots movement. Toward the end of his life, he advocated a vision of global citizenship and, in 1957, issued a historic declaration calling for the abolition of nuclear weapons, entrusting the task of realizing his vision to young people.

Toda passed away on April 2, 1958. His major writings include the million-selling A Deductive Guide to Arithmetic and the novel Human Revolution. A man of unadorned and overflowing humanity, Toda embraced everyone he met with his passionate encouragement. His 58 years of life were dedicated to restoring and revitalizing the spirit of Buddhism in the present age. His convictions continue to inspire and inform the peace activism and social engagement of the Soka Gakkai throughout the world.