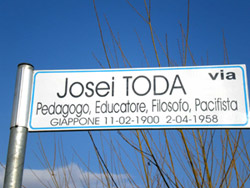 Teramo City in the central Italian region of Abruzzo has dedicated a plaque honoring the memory of Second Soka Gakkai President Josei Toda on a street previously named in Mr. Toda's honor. The plaque was unveiled to mark the 50th anniversary of an historic gathering in Japan of 6,000 youth on March 16, 1958, at which the youth pledged under Toda's leadership to dedicate their lives to the cause of world peace. The plaque describes Mr. Toda as an "an advocate of education, a teacher, philosopher and pacifist." Teramo, situated 150 km northeast of Rome, is a scenic historic town that has been a thriving thoroughfare and agricultural center of the region since the days of the Roman Empire.

Josei Toda Street was opened in June 2004 by then Mayor Angelo Sperandio. In 2006, a garden named in honor of Josei Toda opened in the town center of Certaldo in Florence Province. These dedications reflect the ongoing active contributions of SGI-Italy members to the welfare of their local communities.

[Adapted from an article in the March 16, 2008 issue of the Seikyo Shimbun, Soka Gakkai, Japan]