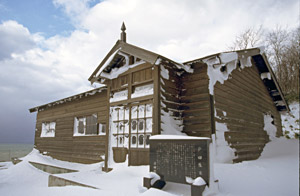 Josei Toda (1900-58) was one of four individuals celebrated in an exhibition titled Four People Related to Atsuta, which was held in Ishikari City, Hokkaido, Japan, from August 18-29, 2009. Each of the individuals in the exhibition had previously been designated “Honorary Villager” of Atsuta Village (which, along with Hamatsu Village, merged with and became part of Ishikari City in October 2005). The achievements of second Soka Gakkai president Josei Toda were celebrated together with those of Matsutaro Sato (1863-1918), former local assembly member and head of the local fishermen's association; Kan Shimozawa (1892-1968), a popular author of period novels; and Junnosuke Yoshibayama (1920-77), the 43rd Yokozuna (grand champion) in professional sumo. The exhibition was held at the Ishikari Public Library and cosponsored by the Atsuta Archives Renewal Planning Committee, the city of Ishikari and other organizations.

August 2009 marked the 55th anniversary of Toda's return visit to Atsuta Village, his hometown, accompanied by a young Daisaku Ikeda, currently president and honorary president of the SGI and Soka Gakkai, respectively. The section of the exhibition showcasing Toda’s life also introduced the achievements of Ikeda, Toda's protégé. Ikeda received the Honorary Villager title in 1977 for introducing the world to his mentor's hometown through his writings.

[Adapted from an article in the August 19, 2009, issue of the Seikyo Shimbun, Soka Gakkai, Japan]