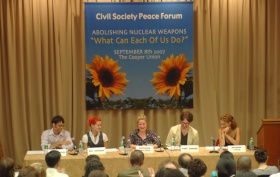 SGI organizations around the world have been calling for nuclear abolition in commemoration of the 50th anniversary of second Soka Gakkai president Josei Toda's Declaration Calling for the Abolition of Nuclear Weapons which was delivered in front of 50,000 young people at the Mitsuzawa stadium in Yokohama, Japan, on September 8, 1957, marking the start of Soka Gakkai's activities to promote peace.

On September 8, 2007, in New York City, 200 people joined a Civil Society Forum, "Abolishing Nuclear Weapons: What Can Each Of Us Do?" at the Cooper Union, cosponsored by SGI, Global Action to Prevent War and the World Federation of United Nations Associations. The panel of young speakers from organizations working for nuclear disarmament was chaired by Kathleen Sullivan, disarmament education consultant to the United Nations.

In his message to the forum, SGI President Daisaku Ikeda stressed, "It was human beings who gave rise to nuclear weapons. It cannot therefore be beyond the power of human wisdom to eliminate them." He called for a wave of dialogue toward abolition led by young people. Panelists echoed the need to engage people at the grassroots more widely. [full message]

The new global SGI antinuclear exhibition, "From a Culture of Violence to a Culture of Peace: Transforming the Human Spirit" was also on display. It includes sections on "Arms-based Security vs. Human Security" and "Changing Our Worldview," and facts on global efforts to control and eliminate nuclear weapons. 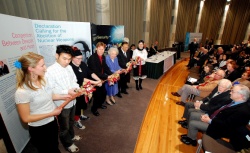 Opening of the antinuclear exhibition at the
New Zealand Parliament 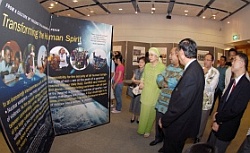 Malaysian Minister of Foreign Affairs, Dato Seri Syed Hamid bin Syed Jaafar Albar, opened the exhibition on September 2, at the Soka Gakkai Malaysia (SGM) Wisma Kebudayaan in Kuala Lumpur. The showing was cosponsored by SGM and Physicians for Peace and Social Responsibility (PPSR), an affiliate of International Physicians for the Prevention of Nuclear War (IPPNW).

Also on September 8, 300 youth members of SGI from 56 countries gathered for a peace conference in Yokohama where an SGI World Youth Peace Declaration was adopted. This includes a vow to work for nuclear disarmament and create a culture of peace as well as commitment to wide-ranging dialogue and cooperation with people of other faiths. 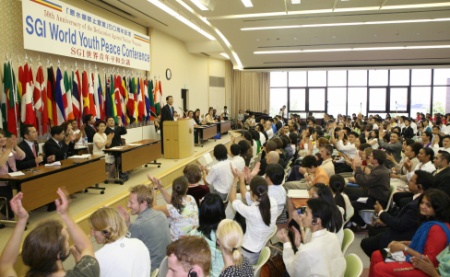 In Tokyo, the Soka Gakkai Women's Peace Committee hosted a "Culture of Peace Forum for Mothers and Children" on September 9 with 1,200 participants, from elementary school children to survivors of the atomic bombing of Hiroshima. Singer and UNICEF Goodwill Ambassador for Japan Agnes Chan performed and told the audience about children at risk from depleted uranium in Iraq following her recent visit there. 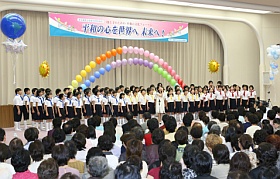 "Culture of Peace Forum for Mothers and Children"
in Tokyo

SGI-Denmark hosted a youth meeting in Copenhagen on September 8 at which John Scales Avery, chair of the Danish Committee of the Pugwash Conferences on Science and World Affairs, stressed that the vast majority of the world's people have said "no" to nuclear weapons, and at SGI-UK's South London National Centre in Brixton, a multimedia exhibition "LIFE--truth, justice, dignity" calling for nuclear abolition was opened by Prof. Robert Hinde, chair of Pugwash UK.

[Adapted from an article in the October 2007 issue of the SGI Quarterly compiling various SGI reports and articles published in the Seikyo Shimbun, Soka Gakkai, Japan.]