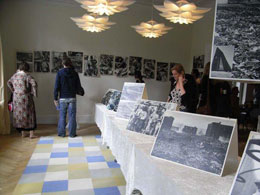 On September 8, 2007, around 100 SGI members and their guests gathered at SGI Denmark's Nordic Culture Center to commemorate the 50th anniversary of second Soka Gakkai President Josei Toda's historic declaration in 1957 condemning nuclear weapons, which threaten the collective right of humanity to exist, as an absolute evil and calling on young people to work toward their abolition.

The event's keynote speaker, John Avery, chair of the Danish Committee of the Pugwash Conferences on Science and World Affairs and member of the Danish Peace Academy, as well as associate professor of quantum chemistry at the University of Copenhagen, spoke in a heartfelt manner about the real risk nuclear weapons pose in today's world. He stated that 27,000 nuclear warheads now exist and that a small accident can have catastrophic consequences. He also referenced Mr. Toda's declaration 50 years ago along with the International Court of Justice's 1996 advisory opinion, "The Legality of the Threat or Use of Nuclear Weapons," saying that both share the same intention. He also cited SGI President Daisaku Ikeda for providing genuine hope that the nuclear weapons threat can be reversed with the power of dialogue that expands friendship and removes obstacles which obscure our common humanity. He stressed that the vast majority of the world's people have said "no" to nuclear weapons. [In 1995, Dr. Avery was among a group that shared the Nobel Peace Prize for their work to organize the Pugwash Conferences on Science and World Affairs that addressed the nuclear weapons threat to human peace and security.] 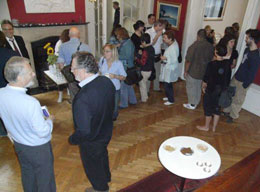 Following the speech, youth representatives Anders Sorensen and Stine Caspersen read Mr. Toda's declaration and shared their own determination to carry on his legacy.

The event also served to open a poster exhibition of photos taken at Hiroshima after the atomic bombing. The exhibition, on loan from the Danish Peace Academy, was displayed for the next two weeks. The day concluded with a song from elementary school children accompanied by young women's division members. The event was organized by young people, who made up half of the audience.

[Adapted from an article in the September 20, 2007 issue of the Seikyo Shimbun, Soka Gakkai, Japan; photographs courtesy of SGI-Denmark]