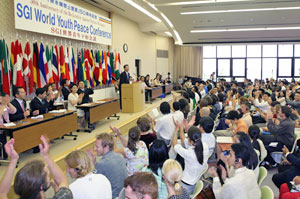 On September 8, 2007, SGI youth members from 56 countries gathered for a peace conference at the Soka Gakkai Kanagawa Culture Center, Yokohama, Japan. The SGI youth unanimously adopted the "SGI Youth Declaration for World Peace," which included a vow to work for nuclear and conventional disarmament and to create a "culture of peace," as well as engaging in wide-ranging dialogues and cooperating with people of other worldviews and religious traditions. The conference commemorated the 50th anniversary of second Soka Gakkai President Josei Toda's urgent call for the abolition of nuclear weapons to the thousands of youth who had gathered at Mitsuzawa Stadium in Yokohama on September 8, 1957, just months before his death.

In a message read at the meeting, SGI President Daisaku Ikeda explained the significance of this legacy, as follows: "This was the height of the Cold War, and the competition to develop and deploy nuclear weapons was heating up. Yet Mr. Toda condemned--in powerful, even strident, language--the destructive human impulses that underlie these weapons.... Mr. Toda solemnly entrusted the mission of achieving the abolition of nuclear weapons to the 50,000 young people who had gathered in Yokohama, Japan, to hear him on that day." Pointing to the devastation wrought by nuclear weapons that can brutally slaughter vast numbers of people as well as condemn survivors, to suffer from radiation sickness, and subsequent generations, Mr. Ikeda asked, "What are nuclear weapons, if not a barbarous and unmitigated evil that denies and tramples on the inherent dignity of life itself?" He urged humankind to "develop a shared consciousness that nuclear weapons are an absolute evil whose existence can never be justified." He also determined to continue working together with young people to initiate grassroots efforts for the cause of nuclear abolition and humanity's peaceful coexistence. 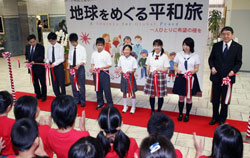 At the Kanagawa Culture Center in Yokohama
where the SGI World Youth Peace Conference
was taking place, elementary school children officially
opened "A Journey of Peace Around the World,"
being held next door at the Toda Peace Memorial Hall.
The exhibition commemorates President Toda's
antinuclear declaration and features
his peace efforts and those of his predecessor
Tsunesaburo Makiguchi and successor Daisaku Ikeda
(September 8, 2007)

Ms. Wallace spoke about the SGI antinuclear exhibition "From a Culture of Violence to a Culture of Peace: Transforming the Human Spirit," which SGI-New Zealand cosponsored with the New Zealand Institute of International Affairs with support from other community organizations. The exhibition, held at the New Zealand Parliament's "Beehive" building in Wellington on August 9, celebrated both the 20th Anniversary of New Zealand's Nuclear Free Legislation and the 50th anniversary of Mr. Toda's antinuclear declaration, and was launched with a keynote address by former UN Under-Secretary General Dr. Anwarul K. Chowdhury.

Mr. Hirayama explained that with France, Russia and the UK being among the five nuclear weapons states that are recognized under the Nuclear Nonproliferation Treaty (NPT), SGI-Europe youth's efforts have focused on raising awareness of and a sense of responsibility for communicating the urgency of nuclear disarmament. Recent activities have included an antinuclear exhibition in Spain, a peace event in the UK and a gathering of SGI youth in the Benelux countries. He expressed his resolve to work together with SGI-Europe youth to share the important message of establishing a nuclear-free world with other NGOs and peace activists.

Ms. Migliorini, a kindergarten teacher, reported on the work of the SGI-Brazil (BSGI) educators' group to promote literacy in Brazilian society through its Adult Literacy Education Program initiated two decades ago. Through their efforts, some 5,000 people have learned to read and write, giving them confidence to take part in society. She also reported on the BSGI student division's sponsorship of peace education seminars being held across Brazil appealing for the urgency of nuclear disarmament and protecting the dignity of life through Mr. Ikeda's annual peace proposals.