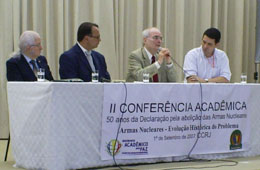 Professor Wehling addresses the audience;
Professor Mourão is seated on the far left

On September 1, 2007, SGI-Brazil sponsored a student conference titled, "Nuclear Arms: The Evolving Challenge," at the SGI-Brazil Rio de Janeiro Culture Center. The event, attended by 320 members and guests, commemorated the 50th anniversary of second Soka Gakkai President Josei Toda's call for the abolition of nuclear weapons. In his keynote speech, Professor Arno Wehling, president of the Brazilian Institute of History and Geography, observed that technological innovation has both negative and positive aspects and that nuclear technology, in particular, has always posed a threat to humanity's right to live. He stressed it was essential for human beings to develop the wisdom to control their lesser desires and employ nuclear power solely for the sake of humanity's happiness. Professor Wehling emphasized that the nuclear problem must not be viewed from a narrow perspective, but rather its solution needs a multifaceted approach. Moreover, he affirmed the importance of dialogue for promoting culture, education and social responsibility, as well as for intelligently tackling the problem of violence.

Renowned astronomer Professor Ronaldo Rogério de Freitas Mourão, also of the institute, addressed the students whom he called "peacebuilders of the future," saying it was imperative for human beings, who invented nuclear weapons to first positively change their inner selves in order to transform their tendency for evil. He closed his talk by stating his conviction that violence can be uprooted through dialogue. "Discussions on Astronomy and Buddhism," a dialogue between Professor Mourão and SGI President Daisaku Ikeda, is currently being serialized in Daisan Bunmei, a monthly Japanese magazine. Mr. Ikeda is an honorary overseas member of the Brazilian Institute of History and Geography.

[Adapted from an SGI-Brazil report and an article in the September 8, 2007 issue of the Seikyo Shimbun, Soka Gakkai, Japan; photos courtesy of SGI-Brazil]