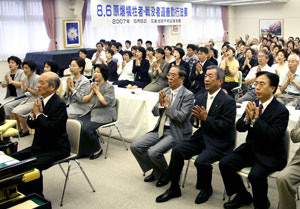 On August 6, 2007, on the 62nd anniversary of the atomic bombing of Hiroshima, Soka Gakkai members hosted a memorial service at the Hiroshima Peace Memorial Hall in solemn remembrance of victims of the atomic bombing and all those who lost their lives in war. Atomic bomb survivors, their families and descendants and youth division representatives offered prayers and incense, according to Buddhist tradition, for the peaceful repose of all who lost their lives as a result of atomic bombings, nuclear testing and nuclear accidents.

The service coincided with the 50th anniversary of the second Soka Gakkai President Josei Toda's historic "Declaration for the Abolition of Nuclear Weapons" on September 8, 1957, in Yokohama. Stating that the atomic bomb is a manifestation of the evil tendency that lurks in human life itself, Mr. Toda earnestly called on youth to take on the mission of working for the abolition of nuclear weapons and protecting people's inviolable right to life. The memorial service reflected this legacy. Following a choral performance, inscriptions from the world peace prayer monument erected at the Chugoku Peace Memorial Cemetery Park in Hiroshima were read aloud. Soka Gakkai leaders in Hiroshima reaffirmed their ceaseless commitment to realizing a nuclear-free world.

[Adapted from an article in the August 7, 2007 issue of the Seikyo Shimbun, Soka Gakkai, Japan]