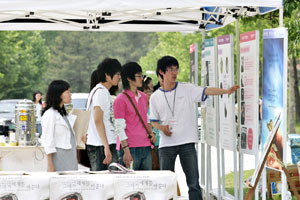 An exhibition at Daegu University

To commemorate the 50th anniversary of second Soka Gakkai President Josei Toda's 1957 declaration for the abolition of nuclear weapons, the SGI-Korea student division sponsored peace and cultural events from May 14-June 6, 2007, at 120 university campuses throughout South Korea. The events drew some 57,000 visitors, including students and faculty.

This year's program, titled "126 Projects for Creating a Nuclear Free World," included a variety of activities such as exhibitions and discussions on peace based on SGI President Daisaku Ikeda's 2007 Peace Proposal, "Restoring the Human Connection: The First Step to Global Peace".

[Adapted from an article in the July 30, 2007 issue of the Seikyo Shimbun, Soka Gakkai, Japan]