Dr. N. Radhakrishnan of the Gandhi Smriti and Darshan Samiti Lectures at the Institute of Oriental Philosophy 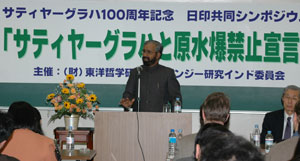 On April 3, 2007, Dr. N. Radhakrishnan, former director of the Gandhi Smriti and Darshan Samiti, New Delhi, India, was invited to lecture at an Indo-Japan Joint Symposium held at the Institute of Oriental Philosophy (IOP), Hachioji, Tokyo, to commemorate the centennial of Gandhi's satyagraha, the non-violence resistance movement for Indian independence, and the 50th anniversary of second Soka Gakkai President Josei Toda's Declaration of the Abolition of Nuclear Weapons on September 8, 1957 in Yokohama. In a lecture focusing on the commonalities between Gandhi's satyagraha movement and Toda's appeal for the abolition of nuclear weapons, Dr. Radhakrishnan observed that satyagraha, which also means the pursuit of truth, resonates with Toda's philosophy of "human revolution"--an inner transformation that is reflected in one's environment. He stressed that this spiritual pursuit requires tremendous courage, conviction, resolve and commitment in order to inherit the philosophies of Gandhi and Toda and actualize them in our daily lives. Once accomplished, such a profound inner change will then trigger the transformation of society at large.

Dr. Radhakrishnan also remarked that SGI President Daisaku Ikeda, who actualizes the philosophy of human revolution inherited from his mentor Josei Toda, is similar to Gandhi in that his activism continues to set an example for humanity.

[Adapted from an article in the April 4, 2007 issue of the Seikyo Shimbun, Soka Gakkai, Japan]